Young and hungry company is in it for the long run

It’s not often that the small enterprises that you start as a child to earn some extra cash evolve into something bigger, let alone a company bringing in millions in annual revenue, but JMR Landscaping is one of the exceptions.

Joey Rossa, founder and president of JMR Landscaping, officially registered his company as an LLC in 2011, but he had his first paying account when he was 9 years old.

“Ever since I could literally walk, ever since I was little I was always big on being outside, walking behind the lawn mower,” he said. “It’s really been in my blood.”

What started out originally as a simple love for the outdoors evolved into a passion for transforming properties into beautiful spaces. Rossa didn’t plan for landscaping to become a career for him but it felt right all the same.

“Even to this point, I don’t look at it from a money side of thing,” he said. “I absolutely love what I do. I love getting to grow the company and look back at it. Still only being 20 years old and having this fairly large company is crazy. I’ve always just enjoyed it. Now that it’s a career, it is about taking it to the next level; it’s about how do we get better.”

Rossa plans on taking a few business college courses next year since he dove right into growing his organization after graduating from high school.

“I do plan on going back at some point on my own time and when I can give it 100 percent,” he said.

Rossa says that the company does a small amount of commercial work but it is for existing clients who own car dealerships, apartment complexes or restaurants.

“Commercial is at a much lower margin,” he said. “It’s much more competitive and not what we’re looking to do.

. The family-oriented culture at JMR Landscaping is very important to Rossa and he strives to maintain it as his company continues to flourish.

“We want to get bigger, but we’re keeping culture and core values in mind because we don’t want that to be changed,” he said. “The more people have fun, the happier the work environment is and then we have phenomenal client experiences as well.”

Chris Russo, JMR’s director of maintenance operations, met Rossa through a mutual friend and as they became friends, Russo said it was a no brainer as to whether JMR Landscaping was the right fit.

“I really liked his passion and his drive for our industry,” Russo said. “He’s like a much younger version of myself.”

Unlike many others, Rossa’s age never bothered Russo.

Although Russo recognized that Rossa has an old soul, Rossa says that his greatest challenge has been his age so far as he is still the youngest person with JMR Landscaping.

“It was really trying to get people to respect me and listen to me,” Rossa said. “But once I got past that and got a core group of people who respected me, everyone who came on afterwards respected the veterans and then me.”

Rossa’s youth wasn’t just an issue for employees at first either. As he competed against much larger companies on the North Shore, many customers were wary about his age and experience.

“I lost jobs due to the fact homeowners weren’t super comfortable with my age, even though I have people who have been in the industry 20 plus years behind me,” Rossa said. “But that’s changed as we’ve landed major projects and people take us seriously now. We have tremendous people in the field who can do great work.”

JMR Landscaping employs about 30 people in the field and seven in management, but Rossa says they’re always looking to hire new workers, and the past two years have seen major growth.

“We’re constantly asking our employees to put the word out, so we really focus on our employees to bring in people they know and work with so there is some sort of comfort level that someone knows that this person is a good worker,” Rossa said. “Does it always work out in our favor? No, but we have a core group of guys that have basically bought into what I’m trying to do and constantly bringing in new workers. That’s been a very strong area of recruitment.”

“I don’t know how to stop or relax,” he said. “It’s always go, go, go. I’ve been surrounded by a phenomenal group of family members who have helped me succeed at this. My mom and dad have been an integral part in the background. My grandparents have been guiding me and giving me good business advice and still help me to this day.”

His father, grandparents and close family friends have served as mentors throughout the years and Russo says he has also helped Rossa over the past two years.

“I think that basically I brought experience and helped him to mature a little bit and understand,” Russo said. “Sometimes when you’re younger and you’re having a lot of fun but at the end of the day we all have to remember no matter what position you’re in is that it’s a business, and we’re in business to take care of our clients and also make a little bit of money.”

The hiring of Chris Russo also helped ease Rossa’s burden when he could no longer handle both the construction and maintenance side of things all by himself.

“I realized I needed help keeping the service up to par to where we wanted to be, and he allowed me to grow the construction side, which is my true love and passion,” Rossa said.

As director of maintenance, Russo is responsible for the selling of all maintenance and enhancement jobs. He also helps build the training programs and aiding his team members’ growth so they can move forward.

“Stepping back more into a family-oriented business and having fun again and interacting with the guys on the ground and helping build something has been phenomenal,” Russo said.

It may sound trite to some, but Rossa is serious when he says he doesn’t think of what he does as work.

Rossa says the keys to JMR Landscaping’s success are having a good drive and a good passion for what they do. The company strives to do things differently from everyone else and learns from the competition’s mistakes.

While age may have been a turn off for some customers, it has attracted other business from clients who appreciate the fresh face and new level of energy JMR Landscaping offers.

The company is also excited about its new collaborative business arrangement with LandServe, which is a landscape architecture and consulting firm run by John Mariani.

“We have no financial interest in each other’s business,”  Rossa said. “We’re just strategically working together. Mariani will help with landscapes designs, and we are his preferred installation contractor.”

As for JMR Landscaping’s future, Rossa wants to slow things down a bit in 2018 so the company doesn’t grow too fast too quickly, but in the next 10 years he says he’d love to get the business to $10-20 million a year and still be able to hold on to their core values.

“I’ve been telling everyone I think everyone will know when we’ve reached the spot where we’re happy, and we’ll figure out what we want to do from there,” Rossa said.

As for his favorite aspect of the business, Rossa likes it all, and isn’t opposed to either running some equipment or keeping things going smoothly from behind a desk. 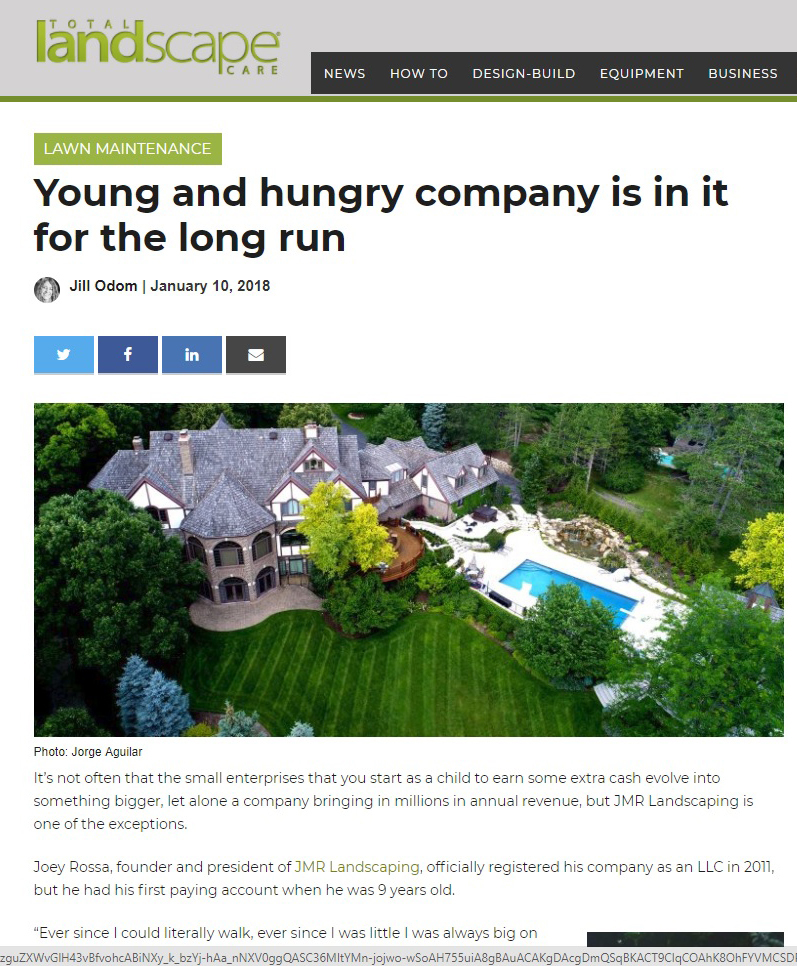 “Ever since I could literally walk, ever since I was little I was always big on being outside, walking behind the lawn mower,”